Lava Beds National Monument (LBNM) located in Siskiyou County, in remote central northern California, is part of the Cascades volcanic belt.  This belt includes numerous other more infamous volcanoes of the Pacific Northwest including Mt. St. Helens and Mt. Rainier.  Resting on the slopes of the Medicine Lake shield volcano, lava flows blanketed this area as recently as 1,000 years ago. The area was once home to the Modoc Indians prior to the Modoc War of 1872-73.  The monument is located near the communities of Tulelake to the northeast and Tionesta to the south.  The Volcanic Scenic Legacy Byway to the west is one of 42 All American Roads; https://www.nps.gov/labe/planyourvisit/upload/park-map.pdf.

LBNM has over a dozen hiking trails that lead to a variety of historical sites and geological features throughout the park.  Take plenty of water, wear your sunscreen and watch out for rattlesnakes in this rocky wilderness.  Pets and bicycles are not permitted on any trails.  These were my favorite hikes; great photo opportunities, educational, and not to terribly difficult (honestly Schonchin Butte is steep, but worth the heavy breathing)!

The trail winds its way through a very rough lava field, so good hiking shoes are recommended.  A dispenser with interpretive brochures is stationed near the start of the trail at the parking lot.  For more in-depth information on this historic event click on the following National Park Service link, a Brief History of the Modoc War https://www.nps.gov/labe/planyourvisit/upload/Modoc-War-FINAL.pdf. 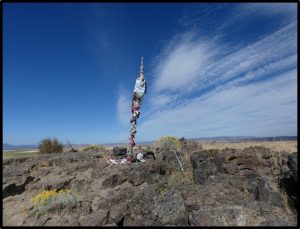 While hiking the .05 – 1.5 mile, historical, educational and culturally important trail try to imagine what it would have been like to be either a Modoc native American or an Army soldier during the winter of 1872-1873.  Prior to 1872 the government had forced the Modocs to leave their home land and move north to live with the Klamaths. Due to tensions with the Klamaths and lack of promised government supplies, the Modocs decided to return to their traditional lands.

That winter the Army attempted to drive the small band of Modocs from the Stronghold.  Approximately 60 Modoc men held off 20 times as many Army soldiers for five months. However, after much bloodshed on both sides the Modoc people were finally captured and removed from their homeland permanently.  As you hike the trail you may see prayer ribbons and sage offerings hanging from medicine poles near the junction of the long trail and short trail.  These offerings indicate the continued importance of this culturally significant area to the Modoc people.  Take a respectful moment to reflect on the loss of the Modoc presence in this area.

A short walk around the site allows you to view the remnants of this spatter cone created from the Devils Homestead aa flow.  As volcanic eruption occurred molten globs of lava stacked on top of one another; the results left a deep chimney behind in the center.

Shaded picnic tables and an accessible restroom are located at the site.  The CCC constructed the tables more than 60 years ago with massive logs acquired from Oregon Caves National Monument.

The trail and fire lookout were built by the Civilian Conservation Corps (CCC).  As you hike the 0.7 mile trail imagine the effort it took to build the trail and haul, by hand, the materials needed to build the lookout!  Your effort will be rewarded with spectacular views of spatter cones and Mt. Shasta to the northwest.

From the lookout’s balcony you can enjoy a cool breeze while reviewing the interpretive panels identifying landmarks in all four directions.  You may even meet an on-duty firefighter depending on the time of the year.

There are literally hundreds of caves in LBNM due to volcanic eruptions over the last half-million years.  Although over two dozen caves have developed entrances and trails, they vary greatly in complexity, length and difficulty.  LBNM has a cave just waiting for you to explore based on your level of expertise, tolerance for tight spaces and the amount of time you have to spelunk!  However, a flashlight, sturdy shoes and head protection is recommended in all caves.

Because I only had one day to explore this park and its many amenities, I chose to check-out Skull Cave which is located off the main park road about 5 minutes from the Visitor’s Center.  It is one of the largest lava tubes and easiest caves to explore.  However, a descent down a metal staircase is required.

What is the significance of the name?  Bones from mammals such as bighorn sheep and pronghorn were discovered here, oh, some human skeletons too!  The cave was once a year-round water source for the Modoc people and animals roaming the area.

Being the remnent of three very large lava tubes stacked on top of each other, the cave traps cold winter air inside of it forming a year-round ice floor at the lower level.  Remember it is much cooler inside a cave, so you may need to take a jacket.

Click here for the LBNM Cave Brochure and Map:

LBNM has instituted screening procedures to help protect the bat population from White-Nose Syndrome, a fungus that is fatally harmful to bats and can be spread by humans who have been in other caves, mines or bat roost areas. 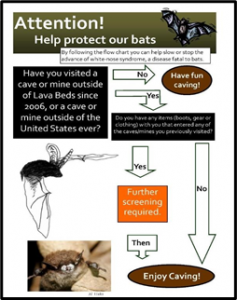 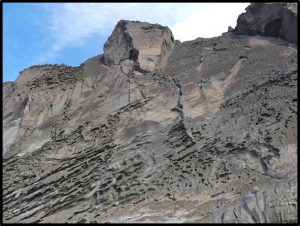 Located east of Tule Lake, the point has over 5,000 symbols carved on its cliff face.  According to Modoc legend, its creator “Kamookumpts”, was resting on the shore of Tule Lake and realized he was surrounded by nothing but water.  He decided to make land, so he dug mud from the bottom of the lake to create a hill.  From the hill he created mountains and animals, rivers and streams.  Kamookumpts tired from creating everything dug a hole under Lake Tule and slept. He left the hill that later solidified and became modern day Petroglyph Point. 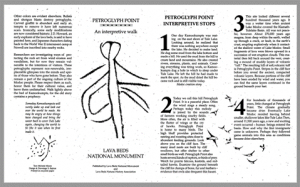 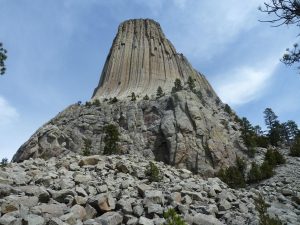 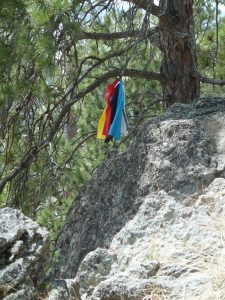